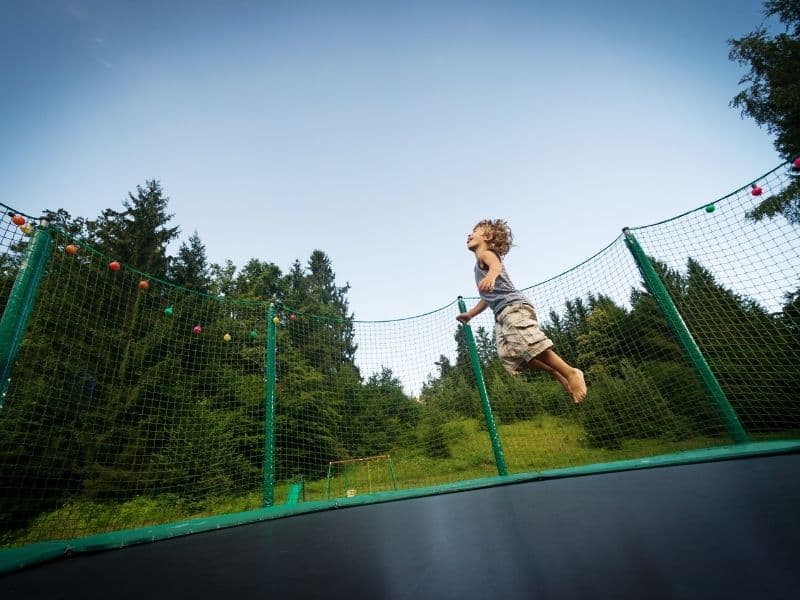 When shopping for a trampoline, there are so many different things to consider. The size, the brand, whether your insurance company will even let you have it… But one of the first and most important things to decide on is the shape of your trampoline. Though the shape of a trampoline may not seem all that significant, it will ultimately dictate a wide range of factors, from safety and bounce dynamics to cost and longevity.

So in this article, I’ll lay out the key advantages and disadvantages of the most popular trampoline shapes on the market.

Trampolines come in several different shapes, including round (circular), rectangular, oval, square, and even hexagonal and octagonal. Round, rectangle, and oval trampolines are by far the most common, with square models not too far behind them. Hexagon and octagon trampolines are fairly rare – only a few brands even make them.

For this reason, this article will primarily focus on the three most popular trampoline shapes – round, rectangle, and oval.

Round trampolines are the most common type for general backyard use. Their ubiquity is due in large part to their relatively low cost and the fact that they can be used safely by people of all ages.

One key benefit of round trampolines is the enhanced safety they provide. The round shape naturally directs jumpers back into the center of the jumping pad regardless of where they land. It’s also more difficult to bounce very high near the edges. Both of these factors make it less likely for a jumper to fall off or hit the edges.

Further, the possible bounce height is generally lower on round trampolines than that of any other shape. Older kids or adults may find this frustrating, but it means that younger kids won’t be launched too high.

The round shape also means that tension, weight, and bounce force are distributed equally among all of the springs and the entire frame at once. This means that the frame can be sturdy without being very heavy. However, this is a bit of a double-edged sword.

The springs may wear out faster since they’re all bearing all of the load, all the time. The jumping pad may also wear out more quickly in the center since the jumper is always drawn back toward that area. In addition, the lighter frame will be more susceptible to twisting or warping when users land hard at a diagonal near the edges.

Ultimately, the durability and longevity of a round trampoline will depend on the materials and overall quality, but in general, round models do tend to wear out more rapidly than some other shapes – particularly when it comes to the springs and pad.

The weight limit for any trampoline depends on many factors, size being chief among them. But in most cases, round trampolines have the lowest weight limits. This is partly due to the even load distribution, as described above, and partly because they’re usually smaller and lighter than oval or rectangular models. And unlike these other shapes, round trampolines are meant to accommodate one jumper at a time.

Despite having a relatively small surface area, round trampolines can take up a surprising amount of space in the yard – since most yards are square or rectangular, the shape is simply at odds with the angles of the yard. So in a fairly small yard, a round trampoline may seem a little obtrusive. That being said, their lighter construction makes them considerably easier to move around.

Thanks to their popularity and relatively low manufacturing/material costs, round trampolines are generally the least expensive of any shape. Of course, this also depends on the brand and size, but the principle still applies in most cases.

Pros and Cons of Round Trampolines

Rectangular trampolines are most commonly used in commercial settings or for gymnastic/athletic training purposes – but they’re still fairly popular for household recreational use. Let’s look at how they compare with round trampolines in each category.

Rectangular trampolines do not have the natural safety features that round models do. There are two main reasons for this. First, they allow for very high bounces, regardless of where the jumper is on the mat. Second, they do not pull the jumper toward the center – you can expect to get a fairly straight and consistent bounce anywhere on the mat.

This makes for a fun, thrilling, and dynamic experience, but it also means that there’s a higher risk of landing on the edge or bounding off and hitting the ground. For these reasons, a quality net and spring pad are especially important on rectangular trampolines.

However, if there are multiple jumpers on the trampoline, the likelihood of a collision is much lower, thanks to the larger surface area and the fact that individual jumpers can get plenty of bounce anywhere on the trampoline without interfering with the other jumper or being drawn toward the center.

Since rectangular trampolines are often used for athletics or multiple jumpers, they typically feature thicker, heavier frames than round models, making them highly durable. And unlike round trampolines, only the springs nearest the point of impact are engaged on each jump. This means that the springs tend to hold up longer.

Likewise, since users aren’t confined to any one spot, the jumping pad will typically wear more evenly and last longer. Again, these are general statements – the durability depends massively on the overall quality of the trampoline.

While rectangular trampolines generally have the largest surface area of any shape (depending on the size), many people find that they fit nicely in their yard. They can be tucked in a corner or placed along the fenceline (not too close, of course), giving them a somewhat more discreet feel. The downside is that they’re a bit harder (if not impossible) to move around without disassembling them, thanks to their extra heft.

Since they usually feature thicker, larger frames, and are more geared toward athletes, adults, or commercial applications, rectangular trampolines tend to be a little on the pricey side. But in most cases, you do get what you pay for.

Pros and Cons of Rectangular Trampolines

Though less common than the previous two shapes, oval trampolines are becoming more popular for backyard use. In many ways, they are a sort of pleasant compromise between round and rectangular trampolines, combining some of the best features of each – but they are not without their drawbacks.

In terms of safety, oval trampolines may be the best overall. They do allow for high jumps, but not quite as high as rectangular models – and the user needs to be in the center (or fairly close to it) to get maximum height. The larger surface area also makes it easier for multiple jumpers to keep their distance and provides a greater margin for wayward bounces.

Most oval trampolines direct jumpers toward the middle of the pad – albeit to a lesser degree than round models – which reduces the risk of landing outside the jumping pad. However, some models do boast two separate “jump zones” – one at each end of the trampoline. This allows two jumpers to achieve maximum bounce without interfering or colliding with one another.

Most oval trampolines tend to have frames of a similar thickness and heft as round models, despite their larger surface area. The stress on the springs will be more localized than on a round trampoline, but all of the springs will still be engaged to some extent on every bounce, especially on smaller models that tend to bring jumpers toward the middle of the mat. This will cause the springs and mat to wear out a little faster, but not quite as rapidly as those on a round model.

Oval trampolines are in many ways the middle ground between round and rectangular models, and yard placement is no exception. They do tend to adhere more closely to the typical yard’s natural shape but they are still rounded, which many people find makes them a little awkward, especially since they take up a fairly large area.

They can also be a little hard to move and require a somewhat more involved assembly process due to their unusual shape.

Since they are large and somewhat exotic, oval trampolines can be fairly expensive compared to round models. But in most cases, they still cost less than rectangular models of the same size.

Pros and Cons of Oval Trampolines

I won’t go into great depth with square trampolines, but they’re worth mentioning for a few reasons. They offer a somewhat (~20%) larger surface area than round trampolines of the same size, thanks to the corners being utilized. They also tend to have thicker, sturdier frames and distribute load stress in a similar fashion as rectangular models. This means that they have higher weight limits than round models and allow users to bounce higher.

Of course, higher bounces and being able to bounce from anywhere on the mat also means that they aren’t quite as safe as round or oval models. And thanks to their hefty construction, they can be fairly expensive.

As you can see, there’s no clear-cut answer to the question of which trampoline shape is best. It ultimately depends on your budget, how much space you have, and what the trampoline will be used for. If you have older kids or you want to use it for gymnastics and other athletic pursuits, a rectangular trampoline may be your best bet. If you want it purely for recreation or get your younger kids exercising outdoors, you may be better off getting a round or oval trampoline. It really is a matter of preference!

I hope this article has helped you make a more informed decision – or at least illustrated the key differences between the popular trampoline shapes available. Thanks for reading!