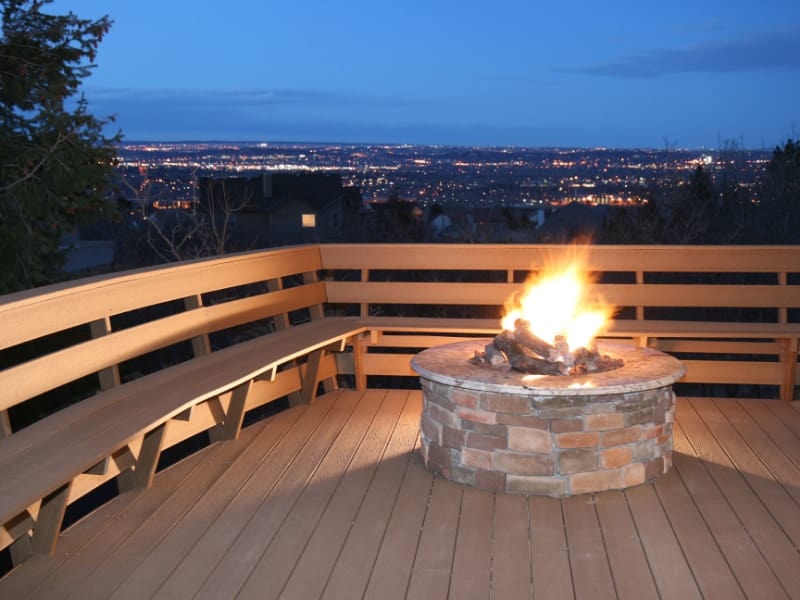 What is Lava Rock? 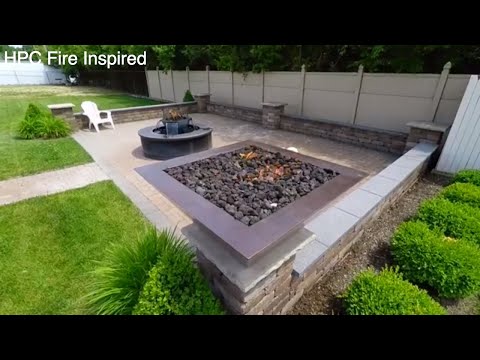 Lava rock is a naturally-occurring type of igneous rock made out of basalt. Lava rocks have a rough, often holey texture due to the rapid cooling of lava that forms them.

Basalts are one of the most common rocks in the earth’s crust and the ocean floor. Since they’re so common, lava rocks are cheap and widely available, making them a great choice for landscaping, commercial applications, and use in fire pits.

Before we delve into lava rock in fire pits, it’s good to know the terminology associated with gas fire pits. Fire media is a term used to refer to lava rock, fire glass, ceramic logs, stones, or other pieces that you fill your fire pit with. Fire media are essential for the effective operation of any gas fire pit.

Why is Lava Rock Used in Fire Pits?

Because lava rock is formed in extremely high temperatures, it’s ideal for use in fire pits. It holds up well to flame and won’t get damaged or deteriorate when heated repeatedly.

If you’ve ever seen a gas fire pit without media, it’s a pretty lackluster sight. The flames shoot straight up out of the metal burner holes, making it look like oversized candle flames instead of a real fire. Lava rock and other fire media help to disperse the gas, giving the flames a more random and natural look.

Lava rock is also good for reflecting heat, making the area around the fire pit warmer than it would otherwise be. Since gas fire pits don’t usually generate nearly as much heat as a wood fire pit, you need a material that can absorb and then distribute that heat, instead of letting it just escape into the air. Lava rock is good for this purpose, although it’s not quite as effective as fire glass.

Having a layer of lava rock over your gas fire pit burner helps give a kind of “buffer zone” between the flame and the burner. This means that the heat of the flame is not close to where the gas actually comes out of the burner holes. This buffer zone can help keep your fire pit running strong for a long time.

Lava rock is also very porous so it dries quickly when it gets wet. You may be surprised, but some rocks retain water inside, and if that water heats up too quickly, it can cause the rock to explode. Which is why you want to choose wisely what kind of rocks you use in your fire pit.

Another reason lava rock is used in fire pits is its cost and availability. It’s generally the cheapest option for fire pit media, which is usually either lava rock or fire glass. Plus, you can head down to your local hardware or home and garden store and buy some, easily.

Not everyone will agree with this point, but a lot of people like the look of lava rock in their fire pit. Maybe it’s because we know that fire and lava rock belong together, or maybe not. Wherever the reason, it can add a nice ambiance to an outdoor fire pit.

Is Lava Rock Safe For Use in Fire Pits?

Yes, lava rocks are generally safe for use in fire pits. However, you’ll want to make sure you’re getting actual lava rocks. They have all kinds of synthetic rocks out there that look like the real thing. It’s not likely you’ll confuse the two (they should always be clearly labeled), but it’s still worth mentioning.

If you’re unsure, many rock sellers or box stores sell rocks in packages that say clearly you can use them in fire pits.

Before you use lava rocks in your fire pit, keep in mind that you should never heat them up when wet.

It’s pretty rare, but lava rocks can explode if they’re wet. This is more common with river rocks and other smooth, semi-porous stones. The best thing you can do to keep this from happening is to cover your fire pit when it’s not in use. This is a pretty good practice in general, to keep your gas fire pit functioning well for years to come.

You’ll also want to check and make sure the drain holes in your fire pit aren’t clogged. Even if you do cover your fire pit, it’s possible for water to get inside. If it doesn’t drain out, it can soak the bottom rocks and even interfere with proper function.

One of the signs that your lava rocks have moisture in them is a popping noise. This often accompanies the explosions that can send pieces of rock out of the fire pit.

If you do hear popping noises or notice rocks exploding, stand well back from the fire pit until it stops. Or, if you can do so safely, turn the fire pit down or off. Sometimes a low flame for 30 minutes to an hour can help evaporate any moisture without causing popping or exploding, but this will depend on your fire pit settings.

Note: Some fire pits are not meant to be left out in the elements at all. Make sure to read your owner’s manual for specific storage and care instructions.

Are There Different Kinds of Lava Rocks?

There are several different kinds of lava rocks. In fact, you have quite a few options when it comes to size, color, and consistency. Most lava rocks are black, dark red, or gray in color.

You can also get them in large, medium, or small chunks. You can even find tumbled lava rocks, which are smoothed out to prevent the rough edges that they typically have.

What color you get is a matter of preference, but size is a different story. The smaller the lava rocks, the more evenly they will disperse heat. So if you’re concerned with providing warmth with your fire pit, you may consider medium or small lava rocks— or a mixture of both!

The Pros and Cons of Lava Rocks in a Fire Pit

There are many benefits of using lava rocks in your fire pit. But, there are also a few drawbacks. Let’s talk about pros first.

Of all the fire media available, lava rock is the cheapest. You may even live in an area where you can pick it up off the ground. It’s abundant and available nearly everywhere. You can also purchase it online.

Protects Burner and Other Pit Components

Can Explode When Wet

How Much Lava Rock do You Need?

How much lava rock you need will vary for each fire pit. You’ll have to take into account the shape, size, and depth of the fire pit to determine how many pounds of lava rock you’ll need. Some owner’s manuals will tell you how much you need, so make sure to take a look at that to see. If your owner’s manual doesn’t tell you, there are online calculators you can use to determine how much you need.

For best results, try to arrange the smaller lava rocks around your burner on the bottom of your fire pit. Doing this will provide you with a solid foundation to put the bigger rocks on, making it sturdy and protecting your burner. You can also use lava rock and fire glass to save a little money.

Fire glass is more expensive and heavier than lava rock. If you’d rather have fire glass, a nice little fire pit hack is to place a base layer of lava rocks in your fire pit and then put fire glass on top of it. This will allow you to save some money on fire glass while benefiting from the solid base that lava rocks provide.

I’ve mostly been talking about gas fire pits because that’s where lava rocks are generally used. However, you can put them in wood fire pits if you want. Personally, I wouldn’t suggest doing this because after a fire or two they’ll just be covered in ash and you won’t be able to tell they are lava rocks at all.

However, they’re great for use as a decoration or exterior lining of your wood-burning fire pit. The same tip still applies here, though: Don’t expose lava rocks to extreme temperatures when they’re wet.

Lava rocks are born from extreme temperatures, making them ideal for use in fire pits. However, like many other rocks, they can explode if they’re heated when wet, although this is rare.

Many people like the natural look lava rock adds to their fire pit. The fact that lava rock is widely available and cheap is also a definite plus. It reflects heat well, provides your fire pit some measure of protection against the elements, and comes in various shapes, colors, and sizes.

Unless you spill or drop something on your lava rocks, they won’t need much cleaning, if any at all. You can use them with fire glass, in a wood fire pit, and even as a landscaping material when you’re done with them.

All in all, lava rock is an excellent choice for any gas fire pit.