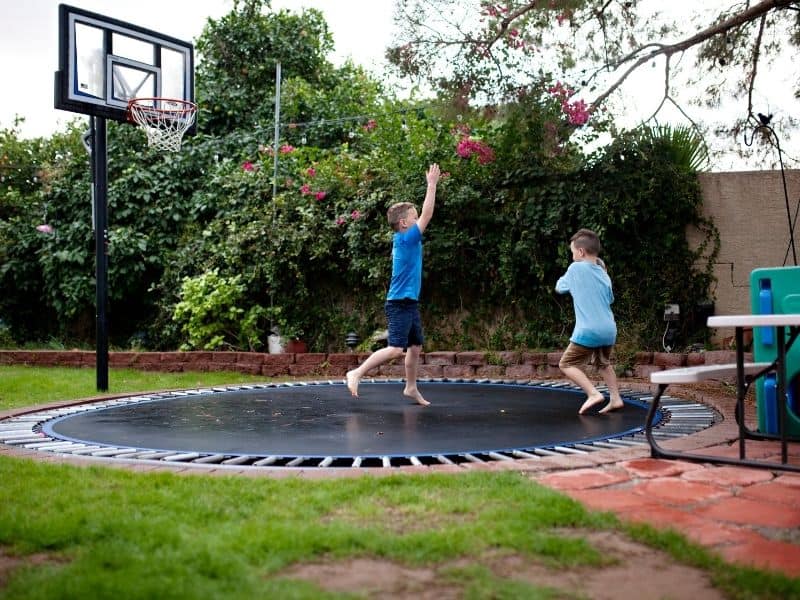 In-Ground Trampolines are Made to Go In the Ground

Before we jump into this article, let me first say that we’ll be discussing the pros and cons of in-ground trampolines. These are trampolines made specifically to be installed in the ground.

First, let’s go over the pros. There are about the same amount of pros and cons for in-ground trampolines, but that doesn’t mean that you shouldn’t still consider all of them. For some people, a particular pro will weigh much heavier than a given con, meaning that one good pro will outweigh all the cons put together.

The number one reason people consider getting an in-ground trampoline is the fact that they look so good. They’re very aesthetically pleasing and they have a low profile, which means they won’t interrupt the Feng Shui of the yard, so to speak. Those with beautifully landscaped yards may opt for an in-ground trampoline simply because it looks better.

However, it’s important to recognize that this doesn’t make the trampoline inherently safe. You can still hurt yourself by falling off an in-ground trampoline. If the trampoline is surrounded by a soft surface, such as grass or padding, then the chances are also decreased, but not eliminated.

That said, if you want the extra safety of an enclosure net on an in-ground trampoline, you absolutely can install one. This added safety feature can give you the peace of mind that comes with ensuring safe jump time for the kids.

In-ground trampolines are pretty easy to cover, which is nice. While not the most impactful pro on the list, this is something to consider. Covering a trampoline is important so you can keep using the trampoline for years without issues. Ideally, these should be covered whenever they’re not in use to protect them from UV rays and the elements. And provided you don’t use an enclosure net, you can easily cover an in-ground trampoline quickly.

Won’t be Picked Up in a Strong Wind

If you live in a windy area, the risks of having a trampoline increase since it’s possible for a strong wind to pick up the equipment and send it slamming into your home, your fence, power lines, or any number of other nearby structures.

With an in-ground trampoline, you don’t have to worry about this. The low profile of the trampoline and the fact that it’s firmly in the ground mean that even the strongest gusts of wind aren’t liable to pick it up and send it flying.

Easier to Get On and Off

Last on this list of in-ground trampoline pros is how easy they are for people to get onto and off of. This is especially helpful if you have little ones that have trouble getting up and down ladders. With an in-ground trampoline, they can simply step or crawl on and then have fun bouncing!

Now for the cons. Most of these have to do with installation and expenses, which is to be expected when you must dig a big hole in the ground!

The Cost of an In-Ground Trampoline

The Cost of Installation

The cost of installation is another big con. But it’s not just the cost, it’s also the effort that goes into installation. Before you dig you must make sure that there are no buried utilities or water lines in the area you wish to dig. You’ll also need to develop a plan for how wide and deep your hole will be if you’re going to dig it yourself.

You can also hire a professional to dig the hole for you, which requires much less effort but more money. These companies charge anywhere between a few hundred to a few thousand dollars, depending on whether they’re just digging or if they’re doing the installation as well.

Drainage Can be an Issue

Drainage is an issue that many people overlook. When you have a hole in your yard, you need to consider whether you will have to facilitate drainage or not. It really depends on the soil. If your soil drains well, you may not have to worry about it. But if you have clay-based soil, it probably won’t drain on its own. Therefore you’ll need to install some kind of drainage solution, such as a sump pump or a natural drainage option.

Just as a regular trampoline needs regular care, so does an in-ground trampoline. This means tightening hardware, checking for rust, and inspecting the components that you can’t see regularly. Since in-ground trampolines are harder to access, regular maintenance becomes more difficult.

They Can Attract Unwanted Critters

Another drawback of an in-ground trampoline is that the pit may attract critters. The nice, shady, cool trampoline pit could be a great place for some slithering and four-legged friends that you may not want around your children. If you live in an area that has a lot of snakes, you could end up with snakes in your trampoline pit. However, if you keep your yard tidy and prevent water from gathering in the pit, this shouldn’t be much of an issue.

As you can see, there are lots of pros and cons to consider before buying an in ground trampoline. It really all comes down to personal preference. If you want something that’s quick and easy to install, can be moved if needed, and is fairly inexpensive then a standard trampoline is the way to go. If you want something that looks better and don’t mind spending the extra money and time on installation, then in ground trampolines are your best bet. In the end, its all in what want.