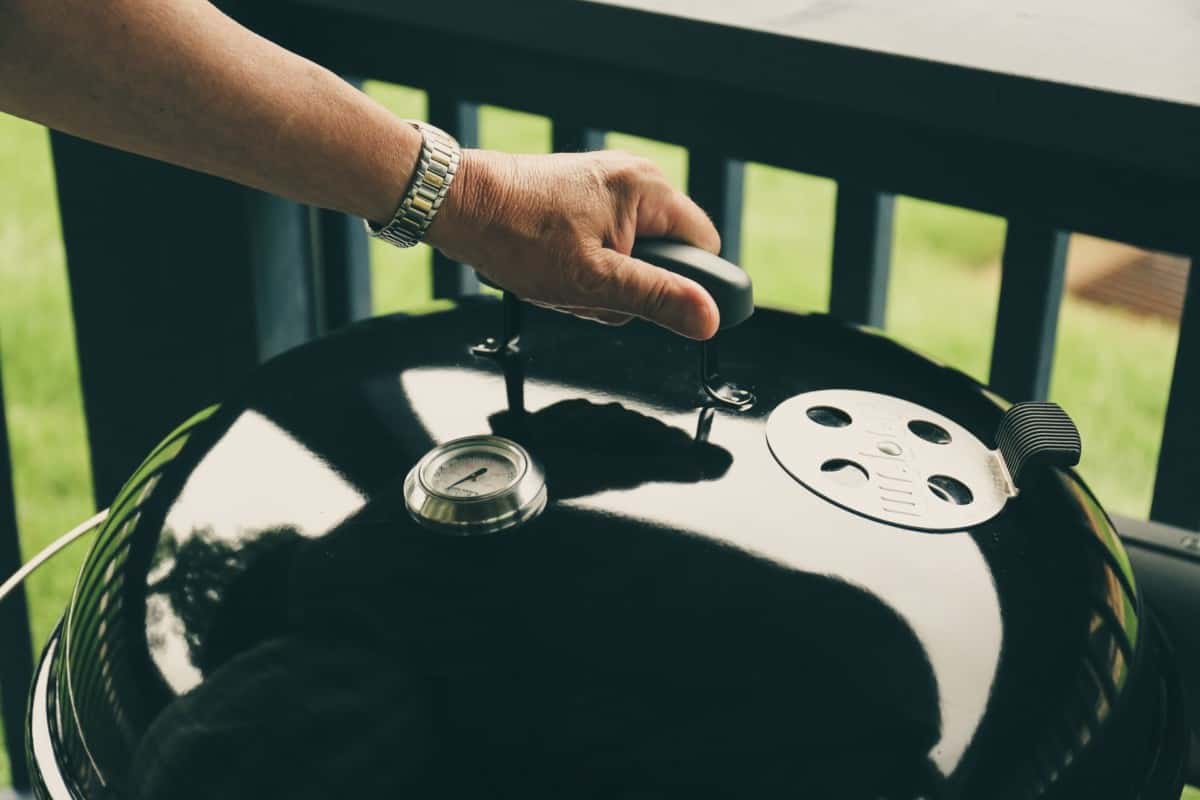 Either way, learning how to use charcoal grill vents will up your barbecue game significantly. You’ll be able to maintain the grill’s internal temperature better and be ready to expertly cook with high or low heat. Plus, you’ll be able to cook great tasting food without overthinking it. Eventually, anyway.

The grill vents do more than you’d think for the taste, texture, temperature, and tenderness. Getting to know your vents is a big step in getting to know how your grill operates. Once you know your grill, you can cook just about anything. Your friends and family will be clamoring for your secrets. It’s up to you whether you tell them about your new best friends: the grill vents.

Where Are The Charcoal Grill Vents Located?

First, let’s start with the basics. You need to know where the grill vents are located to use them properly.

On most charcoal grills, there’s a top and a bottom vent. The top vent is pretty easy to spot: it’s usually a circle of metal with four holes in it. Turning the metal one way will align the gaps in the metal with the holes in your lid, opening the vent. Turning it the other way will obscure those holes, closing the vent. Pretty simple, right?

The bottom vent can be a little more complicated. Usually controlled by a lever, the bottom vent usually has a wider operating range than the top vent. Chances are your grill has illustrations under the lever at the bottom. Those illustrations are meant to tell you what’s opened and what’s closed.

If you can, take out all the racks, clean out any ash, and take a look at how your bottom vents open when you move the lever. This will give you a better idea of what it looks like when in operation.

When doing your grilling research, or possibly even in your grill’s owner’s manual, you’ll see the vents referred to as dampers. In reality, vents and dampers are the same things. Technically, for most grills at least, the bottom vent is called the intake damper. The top vent is usually called the exhaust damper. We’ll stick to calling them vents for the most part, but whenever you do see the term’ damper, you’ll know it’s the same as a vent.

The top vents, otherwise known as exhaust dampers, work in conjunction with the bottom vents to release smoke and maintain the grill’s internal temperature. The top vents are essential not only for cooking but also for getting your coals hot to begin with. More on that below.

The bottom vents, known as intake dampers, allow airflow into the grill and over the coals. That air is then released through the exhaust dampers on the lid of the grill. The bottom vents are essential for many reasons, which we’ll get into below.

Most importantly, however, is the fact that fire needs oxygen to use as fuel. If the bottom vents on your grill become clogged or inoperable, you’ll find it nearly impossible to regulate the temperature inside the grill. But, before we get to that, let’s talk about how to position your vents for starting your charcoal grill. 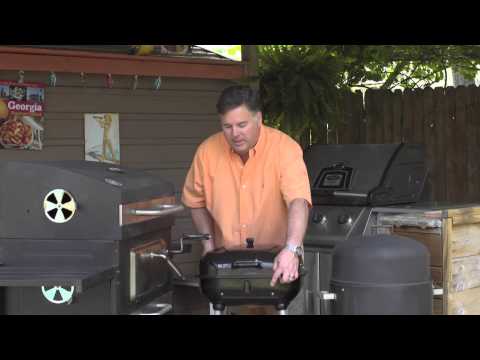 No matter what temperature you’re planning to cook at, you’ll want as much airflow as possible when starting your grill. Once you have a nice bed of coals going, then you can adjust your vents to regulate your temperature. But, when lighting your coals, you’ll want to keep both the top and bottom vents fully open. This will allow for maximum airflow, making it possible for the fire to light your coals fast and even.

If you’re igniting your coals with a chimney starter (which we highly recommend), the best place to put it is on top of the charcoal grate. Keeping your bottom vents open while your chimney starter is working can help feed the coals the oxygen they need to ignite.

Of course, there is one exception to the always-open starting method: excessive wind. If it’s a particularly windy day and you find that there’s too much airflow from the bottom vents, feel free to close them a bit to start your coals.  Now, on to proper vent usage and positioning for different kinds of cooking.

Using your vents properly will help you cook your food ‘just right’ every time. But the vents aren’t the only thing to think about. In fact, the lid is also a significant factor in grilling.

Cooking with the lid on or off can make a huge difference, depending on the food. With the cover off and the bottom vents open wide, you’ll notice flames licking up toward your cooking grate. If you want to sear something, this is the way to go.

Believe it or not, but the position of the lid vents is also something to consider. Since the exhaust vents pull heat, smoke, and air out, changing the position of the lid can change where the heat flows. Positioning the vents over the food will pull more heat over it. Flip the lid around, and you can give that food a little break from that heat.

This can only be done on grills with fully removable lids, though. If your lid flips open on hinges, your best bet is to move the food around on the cooking grate to have this same effect.

Low and slow is the preferred method of barbecue enthusiasts around the world. ‘Low’ refers to the low temperature used. ‘Slow,’ of course, refers to the time it takes for the meat to be ready to eat.

For this method, you’ll want to have the proper coal formation. Most people use the 2-zone position, meaning that you have coals only on one side of the charcoal grate.

Usually, an aluminum pan filled with 2 or 3 cups of water is placed opposite the coals. The meat you intend to cook low and slow is positioned over the pan. This will allow the meat to cook with indirect heat, rather than directly over the coals. The water and the aluminum pan will absorb heat and lower the overall temperature.

You can get a similar effect by putting an empty aluminum pan next to the coals. Without the water, the pan will lower the temperature in the grill, but not as much.

Now, on to the vents. You’ll want to close both the top and bottom vents about half-way— maybe a little more. Keep an eye on the temperature. Low and slow is best done between 225 and 275 degrees Fahrenheit, with 225 degrees being ideal.

By the way, if you have a built-in thermometer on your grill, ignore it because it’s probably wrong. Get yourself an excellent thermometer, like this one. It will make your life much, much easier.

If the temperature is high after the first hour or so, close the vents a little more. Just keep in mind that you never want to fully close either the top or bottom vents. Closing either of the vents will starve your coals of oxygen, eventually putting out the fire. A little trial and error will do you good in getting to know your grill.

Note: If you’re looking for a smoky flavor on your low and slow meat, throw a few wood chips on the coals. To keep the grill’s temperature low, it’s best to soak the wood chips for an hour or so. Otherwise, they’ll burn out quickly and increase the heat for a short time. Mesquite and hickory are both excellent to start with.

While low and slow cooking is the best method for ribs, whole birds, and larger chunks of protein, sometimes you’ll want to cook hot and fast. If you’re throwing some burger patties, hotdogs, chicken thighs, or veggies on the grill, hot and fast is a great way to go.

For maximum heat, you’ll want to cook your food directly over your coals, although the 2-zone method is still an excellent way to go. With 2-zones, you can have a place to move the food that’s cooking too fast.

Anyway, as you can probably guess, you’ll want both of your vents wide open for this one. More airflow means higher heat.

Of course, don’t be afraid to close them a little if your food is cooking too fast and the other fixins aren’t ready yet. If your flames are too high, it means there’s lots of oxygen flowing through. A little tinkering with your vents will give you an idea of how your particular grill works.

Now you’re armed with all the information you need about how to use your charcoal grill vents. Be aware, though, that there is such a thing as a leaky grill. If your charcoal grill has a crack anywhere in the body, it could be affecting the way your food is cooked. Your best bet is to seal it up with a food-grade sealant or purchase a new grill.

Most grills only have two vents, but don’t forget about the power of the lid. With the lid on, your grill acts like an oven, with the lid off, your food cooks from direct heat. When the lid is on, fully open top and bottom vents mean a higher temperature. Close the vents down some, and the temp will drop. But you never want to close the vents all the way unless you want to put out the coals.

I hope this article has been helpful and that you’re now prepared to get your grill on! Thanks for reading!