Chances are you’ve been there at some point. No matter what you try, the fire just won’t start. It looks promising as the flame grows, but then some unseen force extinguishes it and you’re back where you started. It happened to me one too many times, so I decided to get serious about the best ways to start a fire pit. So, I’m happy to share with you exactly how to start a wood-burning fire pit. Thankfully, it’s easier than you might think.

First, I’ll list an overview of the steps that I’ve had the best luck with, then I’ll get into details about each step and things like fire starters, wood, tinder, kindling, and safety. This post is only about wood-burning fire pits. I’ll tackle gas fire pits in another article.

How To Start a Wood-Burning Fire Pit: The Steps

Clear of any debris and ashes from previous fires.

Place tinder in the center of your pit.

Decide on a structure and arrange it in accordance.

Gradually add fuel to build the fire without smothering it.

Before we get into the nitty-gritty, let’s talk supplies. I recommend using fire protection gear like gloves, tongs, but many people do just fine without them.

You’ll definitely want to have some sort of extinguishing substance on hand. You can use any of the following:

As for producing flame, you’ve got tons of options. My personal favorites are regular disposable lighters and plasma beam lighters for windy days. But you can use any of the following:

Tinder vs Kindling: What’s The Difference?

I sometimes call kindling tinder and tinder kindling. It’s an easy mistake to make, but I’ll clear it up right now.

No, it’s not a dating app. At least not for our purposes. You’re welcome to try to start a fire with an app on your phone, but I strongly recommend that you don’t. No good can come from it.

Tinder is any kind of combustible material that will light quickly when touched with flame or spark. You’ve also got plenty of options for this, but keep in mind that your tinder, like all your fire fuel, needs to be dry. It’s nearly impossible to light wet or damp tinder.

Kindling is kind of the halfway point between firewood and tinder. It’s larger than kindling but smaller than typical firewood. Good kindling is wood or branches that are dry, no thicker than your thumb, and about the length of your forearm.

Best Characteristics and Types of Firewood

For best results when starting your wood-burning fire pit, you’ll want to keep in mind the best characteristics and types of firewood. Obviously, just like your kindling and tinder, you’ll want dry firewood. But I don’t mean just dry as in it hasn’t been rained on. I’m also talking about the kind of dry that only comes from dead and seasoned firewood.

When people talk about seasoned firewood, they mean wood that has been cut and allowed to dry. Over time the moisture and sap in cut wood will evaporate, making it ideal for burning. Seasoned wood burns hotter, lights easier, and generates less smoke than green firewood.

The amount of time wood needs to become seasoned varies by the type of wood. Generally, people suggest that you cut and store firewood this year that you want to use next year. But, if you want to get technical about it, some types of wood take two or three years to become fully seasoned.

How Can You Tell if Your Firewood is Seasoned?

Many people say that your firewood is seasoned when the moisture content is less than 20%. I don’t know about you, but I never learned the secret power of telling how much moisture is in a piece of wood by looking at it. Of course, you can always use a moisture meter if you have one lying around, but I wouldn’t go out and buy one unless you really want to geek out over your firewood. No judgment here.

Hardwoods will give you longer burn times, more heat, and less smoke. Here are some of the best hardwoods for backyard fire pits:

All of these woods are great for fires and should be seasoned for a year, ideally. But, there is an alternative to seasoned firewood that you can use if you’re so inclined. It’s called kiln-dried firewood.

Essentially, kiln-dried firewood is an efficient way to speed up the drying process. It takes a special kind of kiln that will remove moisture and insects from the wood by heating it up. Kiln-dried firewood must dried for at least 75 minutes at 175 degrees. However, some firewood suppliers cook their wood for longer at higher temperatures to give you an easy-to-light and clean-burning firewood.

This stuff isn’t available everywhere, so you’ll have to shop around. Amazon does have a couple of options you can have shipped to your door. Here’s a customer favorite.

You’ll want them at hand for easy retrieval. When you’re dealing with a stubborn fire, even a couple of seconds can mean the difference between the fire starting and dying.

Also gather your lighter, matches, or your preferred method of producing flame. Plus, any protective gear you may want, like tongs or fire gloves.

Oxygen is essential for starting a fire, so you’ll need to clear out any half-burned logs, ashes, and other debris from the fire pit so oxygen can flow freely. Of course, make sure the ashes have had enough time to cool since your last fire.

Place a small pile of tinder at the bottom of your fire pit. Make sure the pieces of tinder aren’t loosely packed, so air can flow through. The only term I can think of for this is “fluffing the tinder” but you’re welcome to use a term that doesn’t sound quite so inappropriate.

All joking aside, this is a common mistake that people make— myself included. I felt like packing the tinder into a mound was the way to go. When my fire wouldn’t light, I didn’t know what was wrong. When I finally started laying the tinder in a loose pile, it became much easier to get a fire going.

This is where you can get a little creative. My personal favorite arrangement of kindling is the classic teepee look. Some people suggest a pyramid arrangement, which is pretty much the same thing as the teepee. You can also do a log cabin arrangement, but it’s a little more time-consuming and involved. However, it’s great for you architects out there.

Leave some gaps between the branches, sticks, or thin-cut logs that you are using for kindling. This is important for airflow and so you have a place to light your tinder. You also want it to be fairly sturdy. This is one drawback of the teepee or pyramid arrangement: they tend to fall over if they’re not sturdy enough.

However, if they fall over when the flames are going strong, it’s not so much a problem. You just need the structure to last until a majority of kindling catches fire.

Once you’re happy with your kindling arrangement, it’s time to light your fire. For best results, light your tinder in a well-chosen spot, instead of skipping around all over. If you have a lighter, it’s not such a big deal. If you’re using a match, you generally don’t want to be skipping all over the place with it.

If it’s windy, light the kindling on the side that the wind is coming from. This way it will push the flame further into the kindling instead of away from it.

When your kindling is lit nicely, you can begin to add small logs to the fire. You want to gradually work your way up to the biggest logs you want to burn so you don’t end up smothering your fire. The bigger the flames get, the larger the logs you can put on. So start with pieces of wood that are slightly larger than your kindling, and keep adding as the fire grows until you have made it the size you want it.

Only add one or two logs at a time to avoid smothering the flames, and try to maintain a teepee or log cabin structure throughout. 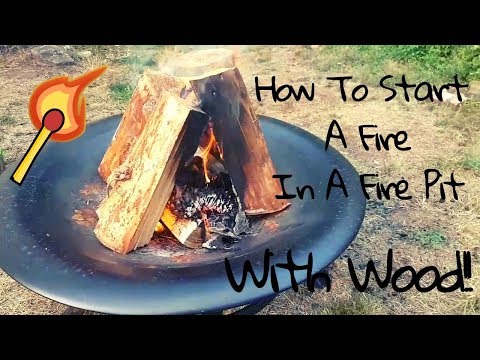 Now that I’ve covered the detailed steps of how to start a wood fire, I’d like to talk about a way to make it even easier. Personally I don’t like to use lighter fluid or any other chemicals to light my fires. Not only because I do cooking on my fire pit sometimes, but also because I just don’t like the smell.

Plus, with a young kid around, the fewer chemicals in the house the better. So, on those days when I’m feeling a little lazy, I’ll replace some of my tinder with a natural firestarter. Here are some of the options if you want to go this route:

As you can see, starting a wood fire pit is easier than you think. You can get as sophisticated as you want with fire starters, a moisture meter for your wood, or kiln-dried firewood. Or you can use stuff you have around the house and the yard. Either way, the same guidelines apply: use dry materials, leave room for airflow, use a teepee or log cabin structure, and gradually add larger pieces of wood until you have a nice big fire.