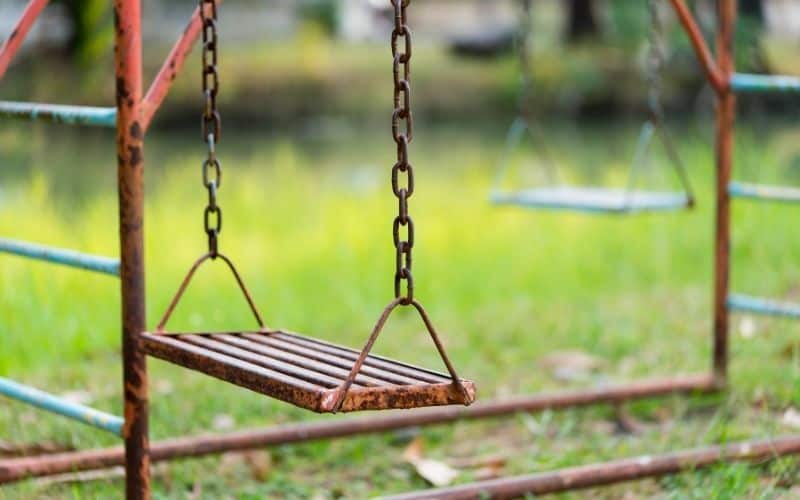 A swing set can be a source of joy and fun for you and your kids for years. But over the years, the elements can take a toll on your swing set. With a metal swing set, the biggest issue is rust – and once it starts, it can be virtually impossible to stop. Of course, most metal playground equipment is designed to be rust-resistant, but this doesn’t exactly mean it’s impervious. So in this article, I’ll lay out everything you need to know to help protect your metal swing set from rust.

Why Do Metal Swing Sets Rust?

Metal swing sets rust as a result of exposure to moisture. Most metal swing sets are made from steel, a type of iron alloy. When exposed to oxygen and water, the iron in the swing set undergoes a chemical reaction called iron oxidation, corroding it and converting it into rust.

Once rust has taken hold in any given spot, it tends to spread fairly quickly, corroding the surrounding metal. Unfortunately, the process cannot be reversed, so the only course of action is to remove the rust before it can spread further.

Higher-quality metal swing sets are usually made from galvanized steel, which means the steel is coated with a layer of zinc or magnesium that protects the steel underneath from the oxidation process. Galvanized steel will eventually rust, but it will much longer than it would for standard steel with no protective coating.

Since rust can spread fast and permanently degrade the swing set’s hardware and structural integrity (more about that later), it’s best to do everything you can to keep it from showing up in the first place. Here are a few ways to go about preventing rust on your metal swing set.

Of course, the best way to help prevent rust right from the start is to purchase a swing set made from rust-resistant materials – this typically means either galvanized steel or aluminum alloy.

The best models will have a protective coating on both the inside and outside of the steel tubing (most models only have it on the outside), as well as rust-resistant chains and hardware. Some will even have a vinyl shell on the frame for added protection.

Of course, you’ll end up paying more for a high-quality, rust-resistant swing set, but it will hold up better and last longer than a cheaper standard model.

Prime and Paint the Swing Set

If you’d rather buy a less expensive metal swing set that isn’t made from rust-resistant materials, you can add some rust protection yourself by painting it. It’s even a good idea to paint your metal swing set every year or so as part of your ongoing maintenance and rust-prevention routine.

You’ll want to start by applying a coat of rust-resistant metal primer, such as Rust-Oleum. Or, simply use an all-in-one paint/primer combo. In either case, make sure it’s non-lead-based, rated for outdoor use, and specifically mentions corrosion/rust prevention. For maximum protection, it’s best to apply two coats according to the product’s instructions.

Some folks recommend painting the nuts and bolts (particularly if painting the set before it’s assembled), but adding a layer of paint can make it difficult (or impossible) to screw them in, and the paint will likely be stripped off in the process, anyway. A better option is to apply WD-40 or another brand of anti-corrosion oil to the threads before you install the hardware. Then, you can simply paint the exposed portions once the set is assembled.

Another way to help protect your swing set from exposure to moisture is to put it under an awning. This won’t do much against humidity in the air, but it will help keep it from being rained on. Of course, it isn’t always possible or convenient to place your swing set under an existing awning, so you may need to find a way to add a canopy yourself.

Unfortunately, you may not be able to find a ready-made canopy that will attach to your swing set – unless it came with one. You may be able to find a large enough waterproof yard canopy to do the trick, but it may take some serious work to install it. Alternatively, before storms, you could cover it with a large tarp and stake it out so it covers the whole footprint – which could be more trouble than it’s worth.

But unless you live in an extremely rainy climate, as long as your swing set is waterproofed in one of the other ways listed above, covering it probably isn’t necessary.

Finally, no matter what kind of waterproofing your swing set has, you can help prevent corrosion by keeping it clean. Any dirt or mud allowed to hang out on the metal surfaces can trap moisture and prevent the set from drying out, which will accelerate the corrosion process. Simply wiping down your swing set regularly will help protect it.

What If Your Swing Set Is Already Rusted?

If you have a swing set that’s already rusting, you may be able to remove the rust or replace the affected components. But depending on how extensive the corrosion has become, this may not be a viable option.

For instance, if the swing chains are rusting, you can simply replace them with new ones – preferably ones made of galvanized steel with a plastic or vinyl coating. Likewise, if hardware like bolts, nuts, and washers are rusting, it may be possible to simply replace them. Even if the frame has a few spots of rust on the surface, you should be able to get rid of it fairly easily, which I’ll discuss in more detail shortly.

If the hardware has become so rusted that it’s stuck in place, it likely means that the corrosion has spread to the frame itself, and replacing the hardware may not do much good unless you can remove all of the rust from the frame. Depending on the age of the swing set, this task may take more work than it’s worth.

Similarly, if there’s rust all over the swing set and not just in a few places, it may not be worth the effort to try and remove it – and if the corrosion has gone deep enough, removing it may even leave you with very little actual metal. If the rust has eaten through the frame itself, the set’s structural integrity will be compromised. So if you see any rusted-out holes in the frame, it’s time to get rid of the swing set.

Can You Still Use a Rusty Swing Set?

For the sake of safety, you shouldn’t use a rusty swing set. Rust eats away at metal, compromising its structural integrity and making it brittle. Whether it’s a bolt, carabiner, chain, or part of the frame, a rusty component can break during use, potentially causing serious injuries.

A few rusty chain links or a few small patches of rust on the frame may not seem like a big deal, but it’s best to play it safe and not let anyone use the swing set until the rust has been removed – it’s not always easy to tell how deep the rust goes unless you’ve gone about removing it.

How To Fix a Rusty Swing Set

Provided that the swing set isn’t full of holes or completely taken over by rust, you may be able to salvage it by getting rid of the rust and repainting it. There are a few options for how to do this – sanding the rust away, using a rust remover solution, or using a rust converter. Below I’ll cover each one in turn.

The first method simply involves scraping away patches of rust with steel wool, a wire brush (either in manual or drill bit form), sandpaper, or an electric sander. This method may involve a fair bit of elbow grease, but it can be quite effective. Once the rust is gone, you’ll want to paint over the spot fairly soon, since any gouges or scrapes you leave in the metal will be even more susceptible to rust.

Chemical rust removers are liquid solutions that dissolve or break down rust on contact. Evapo-Rust, Rust-Oleum Rust Dissolver, and WD-40 Rust Remover are a few such products. You simply apply it to the affected area, wait, then scrub away the residue with a wire brush.

If you don’t like the idea of using harsh chemicals like these on your swing set, you can make your own rust remover using household products. These natural solutions may take a little longer, but they’re generally quite effective, especially when combined with some good hard scrubbing.

Rust converters, instead of dissolving rust or breaking it down, cause a chemical reaction that converts rust into an inert substance, forming a barrier and preventing further corrosion. The area can then be cleaned and painted over. While this method may sound like a dream come true, it’s intended more for very heavy rust with no bare metal around, so it may not be appropriate for small patches of rust on a swing set.

No matter which method you choose, once the rust is gone and the area has dried or (in the case of rust converters) cured, you’ll want to make sure the area is clean. Then, simply prime and paint the swingset as described above in the section on prevention.

You may be able to use the first two methods on the chains and hardware if the rust isn’t too extensive, but if more than a few small spots are present, you’re probably better off replacing them.

If you’re opting for a metal swing set, it’s always best to purchase a high-quality rust-resistant swing set, if possible. But regardless, taking good care of your swing set and dealing with rust as it appears will help ensure that you get as much life as possible out of it – it may even last long enough that your grandkids will be able to play on it! Thanks for reading!