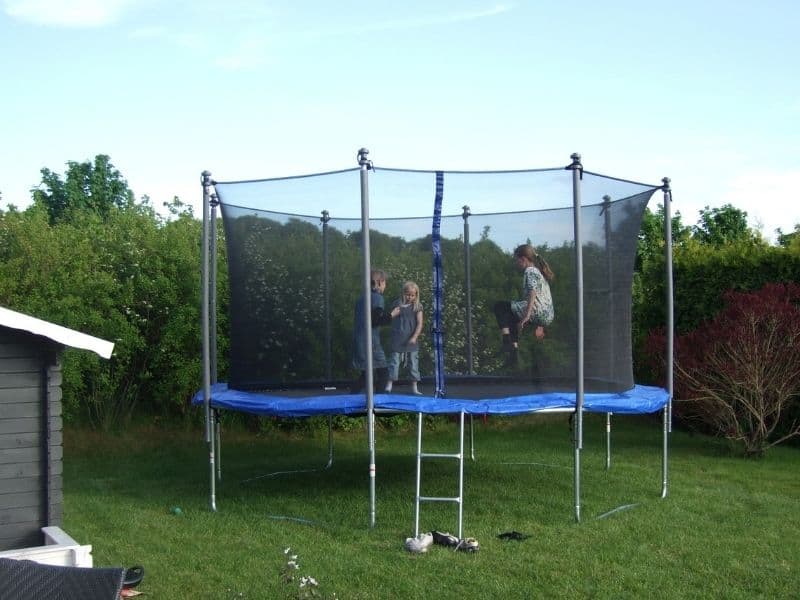 Trampolines are tons of fun. You could even say that they’re one of the best backyard additions for both kids and adults. They provide hours of playtime, even for kids who would normally be staring at a screen. For getting kids outside and participating in physical activity, there’s little better than a trampoline.

But, these sources of fun activity can also be a bit of a pain — especially when you need to move one. And since they have a lot of components, taking one apart sounds like anything but fun. Fortunately, you may be able to move your trampoline without disassembling it. So read on to find out how to move a trampoline without taking it apart.

How to Move a Trampoline Short Distances Without Taking it Apart

The most common reasons to move a trampoline a short distance include:

These relatively short distances make disassembly unnecessary. But there are still some things to keep in mind so you don’t damage the trampoline or injure yourself while trying to move the trampoline.

Lifting the Trampoline With Helpers

One of the easiest ways to move a trampoline without taking it apart is by lifting it. However, this is not a one-person job. Depending on the size and shape of the trampoline, you’ll want a total of two to six people. Smaller trampolines can easily be moved by two people, whereas larger, heavier ones require more people.

Ideally, you’ll want to make sure that the trampoline doesn’t bend much when you move it, which is why it’s important to have more people for larger trampolines. The larger the trampoline, the heavier it will be. And the heavier it is, the more likely it is to become damaged when there aren’t enough people to move it!

Wheels are another good option for moving a fully assembled trampoline a short distance. Some trampolines come with wheels. However, if yours didn’t come with wheels, you can check with the manufacturer to see if they offer wheels for your trampoline.

Wheels are a good option when you don’t have enough people around to help you lift the equipment. If you use wheels on a smaller trampoline, you’ll likely be able to push it across the yard yourself. If you have a larger trampoline, it’s better to have one other person with you.

If you can’t find trampoline wheels for your specific model, you may be able to find some other wheels that will work. Just make sure you measure and check weight requirements to ensure the wheels you purchase will fit and handle the load!

You’ll always want to remove the wheels before anyone uses the trampoline, unless you want the trampoline to move when someone’s jumping on it! 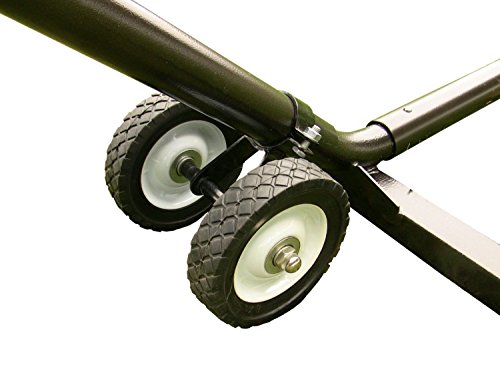 Under the right circumstances, you may be able to slide your trampoline along the ground to move it. This really only works well on grass, as sliding a trampoline along any other surface risks damaging the legs. But grass is pretty soft and it will bend under the legs, providing a semi-slick surface for the trampoline, making it entirely possible to move one this way.

If you’re having trouble, try putting some olive oil or another cooking oil on the legs to provide some lubrication. It’s usually best to try pulling the trampoline if you want to slide it, as it’s easier to generate force this way that it is when pushing.

If your trampoline is larger, you will probably need another person helping to slide it. One of you can push and the other can pull, which makes things a little easier.

If you have a round trampoline, you could flip it onto its side and roll it along to move it. However, of all the methods so far, this one is most likely to damage the trampoline. It’s also the most dangerous, as the trampoline can gain momentum and end up rolling over you!

So this should be a last resort if all the other ways won’t work for you. You should be fairly safe if you do this on level ground and have another person to help you. Or, if you’re strong enough, you can push the trampoline, rolling it along like a wheel until you get to the right spot.

You’ll want to look out for branches, power lines, bird feeders, and awnings while you do this, as hitting them with the trampoline won’t be good. Also, be very careful when putting the trampoline back down on its legs, as this is where injuries and/or damage are likely to occur.

While there are many ways you can technically move a trampoline a long distance without taking it apart, recommending some of them to you is an ethical gray area. So, I’ll briefly discuss one way to do it, and then a couple of ways not to do it. It’s up to you to use this information as you see fit.

Use a Moving Truck or a Flatbed Trailer

If you have a trampoline that’s on the smaller side, you may be able to fit it diagonally into the back of a moving truck. This will take up a lot of room, preventing you from putting other stuff in there (if you’re moving to a new home), but it’s one safe and legal way to move a trampoline without taking it apart.

You could also use a flatbed trailer by placing the trampoline on its side and strapping it down securely. However, before you commit to this tactic, it’s important to determine if there are any height limits for cargo in your area, and height limits for cargo on the trailer (if you’re renting it), and any low-clearance areas along your route. Trampolines are pretty tall when stood on-end, and it only takes one low-hanging power line or a low-clearance bridge to ruin your day and cause hundreds or thousands of dollars in damage.

The Ways Not to Move a Trampoline a Long Distance

Now let’s go over a few ways to not move your trampoline.

You may have seen pictures or videos of people strapping a trampoline to the side or the back of a moving truck. Not only is this a bad idea, it’s also illegal in most places. If you’re renting a truck, you can bet that it’s against the rental agreement you made with the company. You’re better off taking the trampoline apart.

People have also simply set the trampoline on top of their car, letting the mat and the springs support the whole weight of the structure. This, too, is a bad idea. Not only does a trampoline take up much more than one traffic lane when moved this way, but it can also prevent you from seeing out the windshield.

Either of these ways will also likely get you a traffic ticket. And the cost of a fine is probably going to be more than the cost of paying someone to disassemble and assemble your trampoline.

The video below is for demonstrational purposes only. DO NOT ATTEMPT! 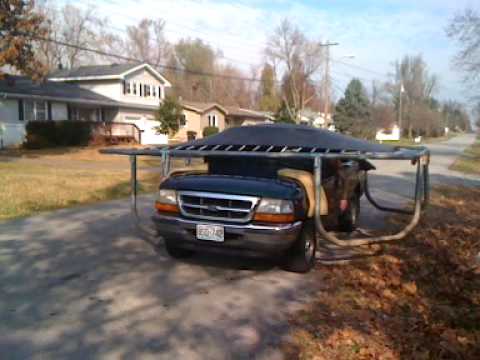 No matter how you decide to move your trampoline, I wish you the best luck. Stay safe!