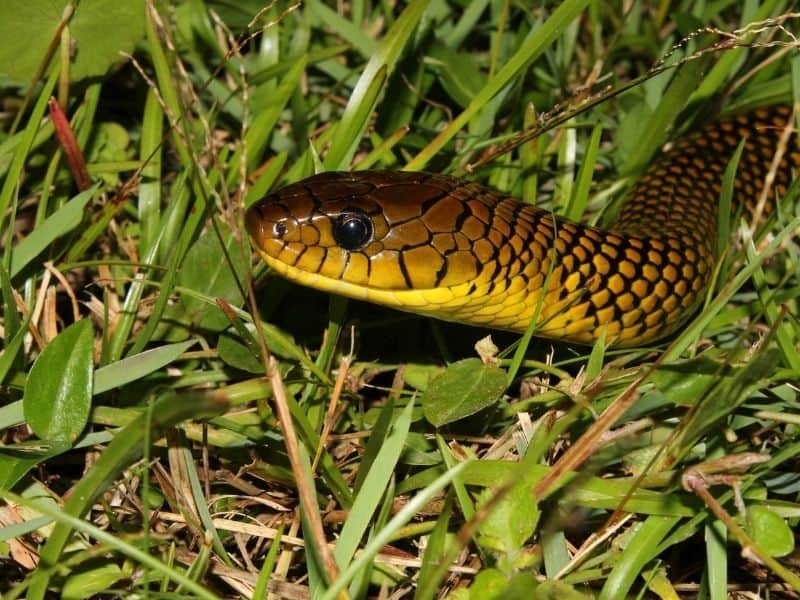 Snakes are one of those animals that many people have a visceral fear of. Not only are many species poisonous, but the way they slide and slither can easily give you the heebie-jeebies! And, unfortunately, snakes seem to be attracted to in-ground trampoline pits. They’ve also been known to slither onto the trampoline mat itself, basking in the warm sunlight that the dark surface attracts.

Even if the snakes that frequent your backyard are of the non-poisonous variety, you still probably don’t want them around while your children are jumping on the trampoline. Luckily, there are several things you can do to keep snakes out of your in-ground trampoline pit — and out of your yard in general. Read on to find out how.

Do You Have a Snake Problem?

There’s an old saying: “One snake a problem does not make.” Okay, maybe I just made it up, but that doesn’t make it any less true. Before you decide to put in the work to keep snakes out of your trampoline pit and your yard, it’s important to determine if you have a snake problem.

If you recently found a snake in your in-ground pit, there’s some cause for concern, especially if you suspect it was a poisonous one. But one snake doesn’t necessarily mean you have a problem. But waiting to find another snake in your yard isn’t the best option. Instead, there are some signs you can look for to help you determine if you have a snake problem.

The presence of snake skin is a good indication that you have a snake making a home nearby. As snakes grow, they shed their skin because it doesn’t grow with them. They grow another layer underneath their old skin, which they shed once the new skin is done growing. Younger snakes can shed as often as once a month. Older snakes shed between four and eight times a year, depending on their age and species.

So keep a look out for the papery, scaly, discarded skin of a snake.

Droppings are another sign that there’s a snake making a home in your yard. Snake poop is often confused for bird poop, so if you think you’ve found some, look up pictures of snake poop online and compare it with what you see. It’s usually tubular and dark, but may include lighter areas of urine. A close inspection often reveals bone and hair from the snake’s prey, which you don’t find in bird droppings.

Snakes, like many other reptiles, often emit a musky smell that’s sometimes mistaken for the smell of a rotting animal carcass. If you go around your yard smelling enclosed spaces, such as sheds or your in-ground trampoline pit, you may be able to smell snakes. If you do find a musky, pungent, cloying smell and you’ve seen a snake recently, you may have a problem.

It’s also a good idea to look out for snake tracks. These often appear in softer soil as smooth, s-shaped or curving grooves.

Snakes don’t actually burrow. However, they are opportunistic, so they often find their way into holes left by other animals. They like these small, dark places. So any holes on your property could be an attractive place for snakes to hang out.

You can tell if a hole has been used recently by checking for spider webs, fallen leaves, twigs, or other obstructions over the mouth of the hole. If the hole is clear of obstructions, it’s likely in use. This doesn’t tell you whether a snake is using it or some other animal, but taken with other signs on this list can give you a good idea if there’s a snake squatting on your property.

Generally an in-ground trampoline pit isn’t a place where snakes want to hang out for long. They prefer smaller spaces where there isn’t so much room around them. However, that doesn’t make the trampoline pit unattractive. Snakes may head into the pit looking after some food, such as rodents or insects. If there’s water pooled under the trampoline, this could attract snakes as well.

Some snakes may actually get on the trampoline itself in order to warm up in the sun. There’s not much you can do to make the jumping mat any less attractive to snakes, but there are plenty of ways to make your yard as unattractive as possible to the slithery reptiles.

Here are some tried-and-true ways to help keep snakes out of your yard and your in-ground trampoline pit.

The first thing you’ll want to do to keep snakes out of your trampoline pit is remove any potential food sources. If you force any snakes that are hanging around to go elsewhere for their food, they may just clear out altogether.

To do this, you’ll want to keep rodents and bugs out of the yard as much as possible. There are plenty of non-toxic insect and rodent repellents on the market that you can use for this, such as this one. However, this next tip on the list is another great way to keep the things snakes like to eat away.

Keeping the yard clear does a couple of things. It helps keep snakes away by removing places where they can hide and it also removes places for bugs and rodents to hide. This is a twofold tactic for keeping snakes out of the yard and, therefore, the trampoline pit.

Regular yard maintenance is best for this, which includes regular moving, keeping any undergrowth trimmed, and making sure there are no layers of leaves, branches, or other organic materials piled up for snakes to hide under.

If there’s a garden or a patch of land that isn’t just grass, it’s best to keep that as clean as possible, as well, keeping any weeds or unwanted plants from growing up and obscuring the ground.

Keep Standing Water Out of the Trampoline Pit (And Anywhere Else)

Once you’ve eliminated food sources and hiding places, it’s time to consider any standing water around the yard. Depending on the type of soil you have, water could pool under the trampoline, which could attract snakes. Many people install a sump pump in the bottom of the pit to pump out any water.

Likewise, it’s important to keep an eye out for any other pools of standing water that can attract snakes, become a breeding ground for bugs, and attract rodents — both of which snakes like to eat.

There are some great snake repellents that you can purchase to create a perimeter around your yard. Most of these repellents work to confuse snakes’ sense of smell, which is very advanced. They rely heavily on their sense of smell, so when they come across something that confuses it, they tend to turn tail and slither away.

One great pellet-type repellent is Victor Snake-A-Way Repellent. This has active ingredients sulfur and naphthalene, which are effective at confusing a snake’s smell.

You can use these to create a perimeter around the trampoline itself, around the yard, or around both from extra protection.

If you would rather try catching any snakes that come into your yard or trampoline pit, you’ll want to use traps. Of course, these can be used in addition to repellent for extra security.

These Catchmaster glue traps are a favorite for catching snakes. If a snake slithers across the trap, it will get stuck and won’t be able to move. However, snakes can stay alive for several days while stuck to a glue trap, so it’s important to be careful whenever approaching a snake caught in one of these traps, as they still may be able to bite you.

Keeping snakes out of your in-ground trampoline pit shouldn’t take a whole lot of work. You may need to perform some initial cleanup and purchase a cheap product or two at first, but once you make your yard an unattractive place for snakes, regular maintenance should do the trick. Of course, if you try all of the above tips and still see snakes around the yard and in the trampoline pit, it may be time to call a professional exterminator. For most people, the tips above should work just fine.