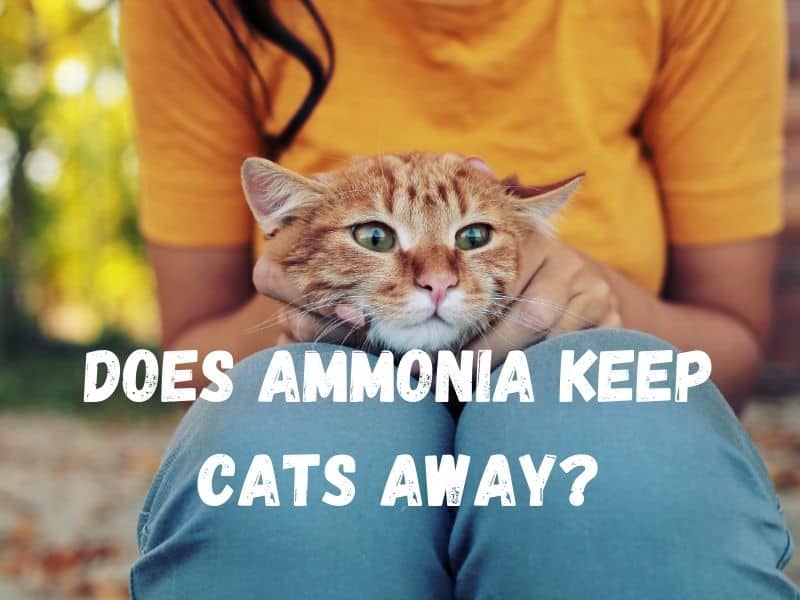 The search for effective cat repellents yields plenty of options. A Google query will bring up thousands of blogs that detail some very good and some very bad ways of keeping cats away.

Often household items or chemicals are suggested, based on little to no evidence. The unfortunate fact is that every cat is different. There’s no guaranteed way to keep cats away, feral or not. There are, however, some tactics people suggest that can cause harm to cats, people, and other animals. Ammonia is one of these. But this still begs the question: Does ammonia keep cats away?

Yes and no. Ammonia can keep some cats away, but it is by far one of the least effective cat repellents. Some cats may even spray near the ammonia smell in an attempt to mark their territory. So, while it may keep some cats away, it can also be dangerous in high doses. Therefore it’s best avoided.

Read on to discover why ammonia is not an ideal cat repellent and which ammonia products to avoid.

Ammonia is a naturally-occurring colorless gas that is essential for life on earth. It’s made up of hydrogen and nitrogen atoms and has a strong, cloying smell often associated with urine (especially cat urine). Small amounts of ammonia are found in plants, animals, water, air, and even humans.

Our bodies make ammonia naturally as we digest protein, eventually turning that ammonia into urea, which is the main component in urine. One form of ammonia, ammonium hydroxide, is found in many common cleaning agents.

Cat urine contains unusually large amounts of urea compared to most other animals. When cats urinate, whether in a litter box or otherwise, urea begins interacting with bacteria there, and it produces the characteristic ammonia smell. This gives cat urine its pungent and often overpowering odor. The odor tends to get worse over time, as the urine degrades. Even after the mess has dried, it can still smell powerful— even to human noses.

This is one of the main reasons NOT to use ammonia to repel cats. Some cats may stay away from the area treated with ammonia while others may see it as a good spot to use the bathroom, thanks to the smell of ammonia.

Another reason to avoid using ammonia involves safety— both for cats and humans.

Why Ammonia is Dangerous

Although ammonia occurs naturally in the environment and our bodies, it can be dangerous in large amounts.

Enough ammonia exposure can actually kill cats. However, most of the time it results in damage to the eyes, stomach, and skin. And cats don’t even have to ingest it for this damage to occur, although that is one way it happens. Ammonia fumes can be inhaled by the felines to cause this type of damage. One study found that ammonia exposure caused chronic respiratory issues in felines. The same can be said for humans, to a lesser extent.

Ammonia in high doses is very dangerous for humans. This is why many household cleaners with ammonia in them state clearly on the packaging to use in a well-ventilated area. Some instructions suggest eye and skin protection, as well.

Believe it or not, the ammonia from cat urine can also cause health problems for the very young and the old. If the cat litter box isn’t cleaned and ammonia fumes are allowed to build up, it can cause eye and lung irritation, headaches, and lightheadedness. It can even cause pneumonia. This is one of the reasons why pregnant women are often advised to have someone else change the litter box.

Although most healthy people are unaffected by the amounts of ammonium in a litter box, health issues occur on occasion.

Is Ammonium Safe For Use Outdoors to Keep Cats Away?

It’s a common misconception that ammonia is safe for use outside to keep cats away. People assume that if the cats are in a well-ventilated area, like outdoors, then the ammonia will not have a chance to damage a cat. Instead, the feline will simply smell a whiff of the gas on the wind and stay away. This, however, is not always the case.

Cats are curious creatures, and they may want to investigate the scent before they make a decision. All it takes is a little bit of concentrated ammonia in the lungs for health problems to start with cats.

And, as mentioned above, some cats will be drawn to the scent and attempt to claim the area by spraying it themselves. Which is the opposite of what you’re trying to do!

This is also not a good idea if you or anyone else likes to work outside in the garden or lounge on the porch. After all, there’s nothing like the smell of ammonia to ruin an otherwise pleasant afternoon.

The fact is that there’s no guaranteed way to keep cats away. Every cat is different, and you’ll probably have to experiment with a few options until you get the desired results. Ammonia, however, is an option you should discount from the get-go.

A worst-case scenario would have you attracting even more cats to your yard and causing health problems for your own pets or family members. And the cats that you do attract will be spraying their own scents around. You could end up worse off than when you started. And that’s not even considering the damage the ammonia could do to the cats.

There are plenty of better options for keeping cats away that are more effective and non-toxic. Check out my article on How to Keep Stray Cats Off Your Porch for more information and ideas