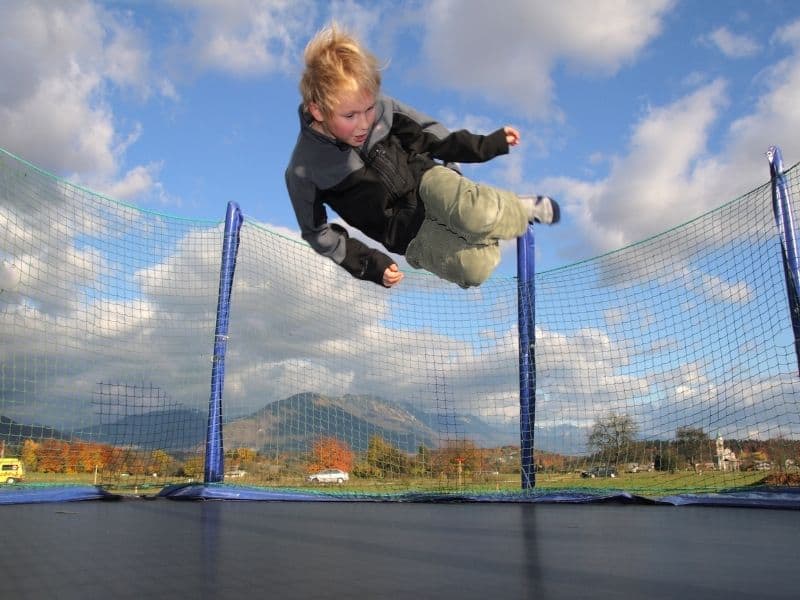 With all the distractions that come with modern life these days, it can be hard to get the kids out of the house. But one sure fire way to get them out and active is to get a trampoline. And if you’re like me, “it’s for the kids” will just be an excuse so that you can bounce around to your heart’s content. But when considering a trampoline, it’s important to know where you can put it. Not everyone has enough lawn space for a trampoline. Others worry that the trampoline will damage or kill the grass. So a common question is often about putting a trampoline on concrete.

But if you only have space on a concrete slab, it doesn’t mean you can’t get a trampoline. Read on to discover just what you need to do to put a trampoline on concrete while remaining safe.

Issues With Placing a Trampoline on Concrete

There are several issues that can affect the safety of jumpers and the integrity of the trampoline itself when placing one on concrete. We’ll take a look at them each in turn. Then we’ll go over how you can address each issue with an easy solution.

The most obvious safety issue has to do with falls. If you don’t have grass or another soft surface under the trampoline, you run the risk of injuries when someone falls off. And someone will fall off without the proper safety precautions.

What would be a minor fall onto grass could be painful and may even require a hospital visit when on concrete. This is the best reason not to put a trampoline on concrete.

If you do put your trampoline on concrete, you can prevent falls and injury by getting an enclosure net for the trampoline. Most new trampolines come standard with one of these safety enclosures, but if you don’t have one, you can purchase one separately. Here’s a good option from Amazon.

When you have a trampoline on grass, sand, dirt, or wood chips, the weight of the trampoline itself and those jumping on it will cause the legs to sink down slightly. This is a good thing because it kind of anchors the trampoline in place, making sure it doesn’t move while people are playing on it.

However, when you have a trampoline on concrete, it’s not able to sink in. This makes movement more likely when people are using the trampoline, which could result in injury or damage to the trampoline or other items on the property.

You have two options to prevent movement of a trampoline on a concrete surface. The first is rubber feet for the trampoline. This will help prevent most movement, but you still risk some movement when the weight limit is approached on the trampoline.

The second is weighing the trampoline down with sandbags on the legs. This is best done in addition to rubber feet. The combination of the two should keep the trampoline in place, provided you’ve used enough sandbags.

Damage to the Trampoline

Believe it or not, placing a trampoline on concrete can damage the equipment. This isn’t likely to happen quickly. Instead, the lack of any shock absorbing material under the trampoline will stress the frame over time and could gradually bend joints, damage hardware, and leave the legs scraped up.

The best way to prevent damage to the trampoline while still keeping it on concrete is to put padding between the trampoline and the concrete. You’ve got plenty of options for this, which we’ll go over below.

What to Put Under a Trampoline on Concrete

If you want a single solution that can help you prevent all the issues listed above, placing a layer of padding underneath the trampoline is your best bet. The right padding will not only give jumpers a softer place to land if they fall off the trampoline, but it will also prevent unintended movement and damage to the trampoline.

Of course, if you want to go another route, you can always cover the concrete with sand, pea gravel, wood chips, or even rubber mulch to provide the same effects as the mats above.

If you do decide to cover your concrete, you’ll have to determine how much square footage you’ll need to cover. Ideally, you’ll have an 8-foot perimeter all around the trampoline, as well as the space underneath it.

Things to Consider Before Placing a Trampoline on Concrete

We’ve covered the common issues you’ll face when placing a trampoline on concrete, but there are still a few considerations to keep in mind: warranty and clearance.

Many trampoline manufacturers will state explicitly in their warranty that placing the trampoline on concrete will void certain aspects of that warranty. Whether you already have a trampoline or are shopping around for one, it’s important to find out if this is the case.

Clearance is important for a trampoline placed anywhere. Making sure that there are no power lines, tree branches, and the like in the way is imperative. It’s also important to make sure the trampoline isn’t too close to any structure. An eight foot fall area is recommended, and this area needs to be clear and padded for safety.

Unfortunately, most concrete pads are pretty close to structures, whether it be the house itself, a garage, or even a shed. If this is the case with where you want to place your trampoline, then it’s important to get as tall an enclosure net as is possible to prevent people from falling off the trampoline and hitting the nearby structure. Better yet, move the trampoline away from the structure, if possible.

Anchoring a Trampoline on Concrete

We’ve already discussed how to prevent a trampoline from moving on concrete. However, many people wonder about anchoring the trampoline to the concrete to keep it from moving. While this certainly is a possibility, there are no specific concrete anchoring sets made for trampolines. Plus, even if you were to anchor your trampoline, you would still want to place safety pads around the area.

Plus, there’s the issue of putting holes in your concrete, as opposed to simply buying pads that you can remove when you move the trampoline. One leaves holes in the concrete, the other leaves it undamaged.

That said, if you live in a place with high winds and you’re worried about your trampoline lifting off, you may want to anchor it to the ground or use a bunch of sandbags to ensure it doesn’t move.

Best Place for a Trampoline

All in all, the best place for a trampoline is on grass. But this isn’t a possibility for everyone. Dirt is also a viable option, although hard-packed dirt should be avoided or padded if possible. But if neither grass or dirt are options for you, a padded concrete pad can do the trick.

Just be sure to check your warranty information to make sure you’re not voiding it by placing it on concrete. And if you are, then it’s up to you to decide whether it’s worth it or not. If it’s the only option, then having a trampoline on concrete (and making it as safe as possible) is better than not having the trampoline at all.

Most trampolines these days come with safety enclosures. If you do nothing else, use the safety enclosure while the trampoline is on concrete. For a little bit more money, you can also place padding between the concrete and the trampoline to keep it from moving, protect the frame, and prevent wear-and-tear issues. These, along with a few other easy safety precautions, can turn your trampoline on concrete from a danger to a fun time for all!