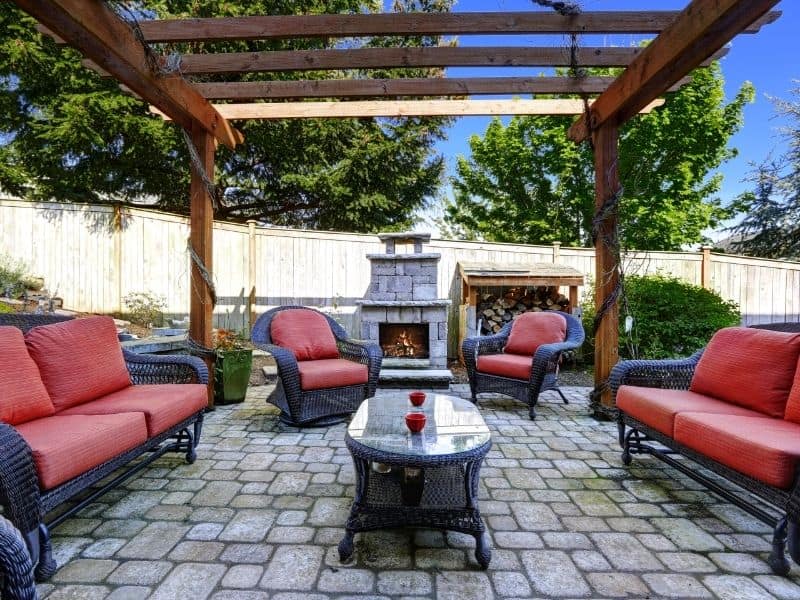 You’ve probably seen a ground-level structure made of wood complete with outdoor furniture, a grill, and every other item you would expect to see on a patio. But this begs the question: Can a patio be made of wood?

Yes and no. Technically, a patio can’t be made out of wood. But, in reality, calling a ground-level deck a patio isn’t going to change how you can use it. In fact, these structures are sometimes called patio-decks.

But for clarity, let’s take a look at the differences and similarities between patios and ground-level decks. We’ll also cover why you may want a ground-level deck instead of a patio in your backyard.

To avoid confusion, we’ll continue to refer to ground-level wooden structures as either ground-level decks or floating decks.

Patios are pretty self-explanatory, but floating decks are a different story. As the name implies, a floating deck isn’t connected to your home of any other existing structure, like traditional raised decks are. Since these decks are built just off the ground, they don’t require railings or large support columns, either.

Patios don’t require support columns or railing either, because they’re built right on top of the ground. Patios aren’t necessarily connected to any existing structure, either. Even raised patios generally aren’t connected to the home like raised wooden decks need to be.

The main difference between patios and floating decks is the materials used. Patios are made out of concrete, bricks, pavers, crushed stone, pea gravel, or other types of stone. The only stone used in floating decks is typically the concrete of the support structure. Otherwise, decks— floating or not— are generally made of wood, composite materials, vinyl, or in rare cases, aluminum.

With different materials come different maintenance needs. People often prefer patios because they’re made of stone and they’re naturally weather-resistant, which means less maintenance. Concrete patios should be sealed once every 2 to 5 years, and they can end up cracking in extremely cold weather, but otherwise, they require little care.

For ground-level decks, wood is the material requiring the most care and usually lasting the fewest number of years. Generally, the more expensive you go with decking materials, the less maintenance you’ll need. And certain types of wood require less care than others. For example, standard pressure-treated wood decking is a cheap option, but it isn’t as naturally rot and insect-resistant like cedar or ipe. As a result, it will need more regular care, with best results requiring re-staining every year or two.

Building a concrete patio is usually going to be the cheaper option of the two. While it’s true that a floating deck doesn’t require as much lumber because you don’t need railing or support structures, the cost of materials and labor is more than that of a concrete patio, in most areas.

Cost is a different story when you start to look at more involved patio projects with expensive stone materials, stamped concrete, or intricate designs. If you don’t want a basic concrete patio, you could probably build a patio out of stamped concrete or brick pavers for around the same cost as installing a floating deck made out of cedar or another low to mid-range material.

Of course, the cost of building any type of patio or deck is dependent on many factors that vary in different areas and with the fluctuations in material pricing. For a more in-depth look at cost, you can read this article.

The process for preparing the ground for a floating deck is a little different than that of a concrete or stone patio. Both need level ground, but a floating deck needs to sit on precast concrete support piers, keeping the wood off the ground. Of course, you can put a floating deck directly on the ground or on a bed of gravel you put down, but this will reduce the lifespan of the deck because it will be in direct contact with the moisture from the ground.

Patios, on the other hand, sit directly on level ground and don’t need any other support structure. Raised patios may require retaining walls and added materials underneath to make the patio level, but the ultimate support still comes from the ground.

Patios and floating decks don’t share a lot of similarities, but the ones they do share may help you decide which is best for you.

Neither patios nor floating decks are required to be attached to the house. This is one reason why you may decide to build a patio or a ground-level deck instead of a raised deck. In most places, any structure that has to be attached to your home, like a deck, requires permits and inspections throughout the process. Safety factors come into play for raised decks that don’t for floating decks or patios.

Along the same lines, ground-level structures don’t require protective railings. Generally, if the deck or patio is under 30-inches off the ground, it doesn’t have to have railings.

Of course, the uses remain very similar for both patios and floating decks. The main limitations for floating decks pertain to fire pits that may require some added protection to avoid burning or otherwise damaging the deck.

While it may not be technically correct, no one’s stopping you from calling your ground-level deck a patio. It may confuse some people, but it essentially serves the same purpose. The materials and labor are generally cheaper for standard patios. Floating decks should be kept off the ground to preserve the wood, while patios are made of stone or concrete and use the ground itself as support.

It may be splitting hairs, but for clarity’s sake, decks are made of wood, and patios are made of stone or concrete. This remains true even if the deck isn’t attached to the house and doesn’t require railings.