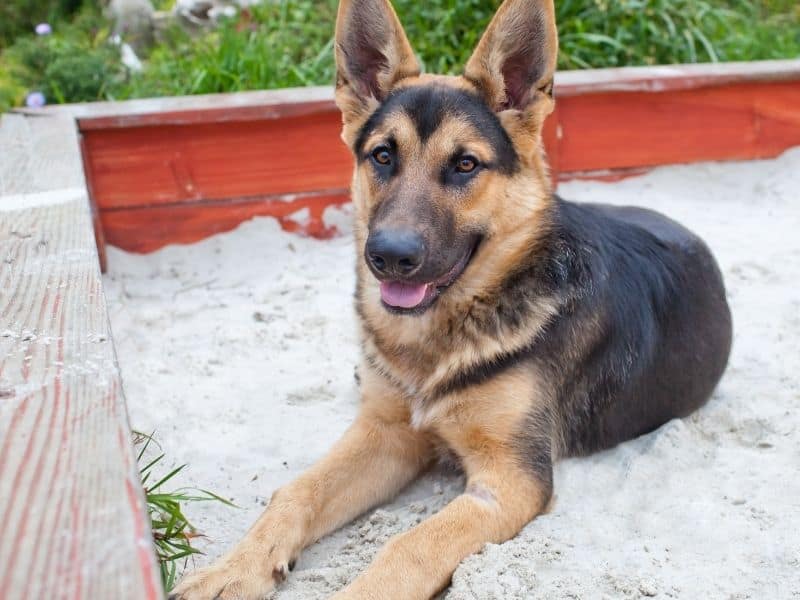 There are many things to consider before putting a sandbox in your yard. The biggest concern is, of course, how safe it is for your children to play in. But if you have dogs that like to spend plenty of time playing in the backyard also, you’ll want to make sure it’s safe for them, too.

Sandboxes are safe for dogs to dig and play in as long as the sand being used is kid-safe play sand. Regular sand should never be used in a dogs sandbox as it contains high levels of dust and bacteria which could cause your dog to become sick or experience respiratory issues.

Of course, there are a few other considerations to make prior to building a sandbox for your dog, all of which we’ll cover in this article.

As cute as it might be (and as fun for all parties involved), it’s probably not a good idea to let dogs play in your children’s sandbox. There are two main reasons for this but they really go hand in hand – hygiene and bug control.

In terms of hygiene, the main concern is that your dog might be tempted to use the sandbox as a bathroom. Aside from just being gross, any waste left by dogs (or other animals) can harbor bacteria and even worms or parasites – the last things you want your kids coming in contact with!

You can discourage your dog from doing its business in the sandbox by putting some toys and treats in the sand – dogs tend not to go to the bathroom where they eat – but this would be problematic in your children’s sandbox since toys and treats can also bring unwanted bacteria into the sand and attract insects.

A huge part of keeping bugs out of your children’s sandbox is keeping food and drinks at a distance. This rule also applies to dog treats such as bones and food-stuffed chew toys. Ants, flies, and gnats may take a keen interest in anything that stays in there for very long. Even pet hair and dander can attract some insects looking for a snack.

One popular and effective way to help repel bugs from your children’s sandbox is to mix some ground cinnamon in with the sand. If you do this, however, it’s even more important to keep your dog out of there. Inhaling cinnamon powder may cause your dog to sneeze, cough, or have trouble breathing (though it would probably take quite a lot of cinnamon to do this). Alternatively, they may find the scent appealing and try to snack on the sand – which can cause big enough problems of its own, as we’ll get into later.

How To Make a Sandbox For Your Dog

If you’ve decided you want to have a sandbox for your dog to dig and play in, whether it’s to spare your garden, keep them from digging under the fence, or just to give them something fun to do outside, you’ll want to make sure it’s safe and that your dog will actually use it.

First up, you’ll want to choose a spot in your yard that has a fair bit of shade, particularly in the hottest part of the day. Digging and playing will raise your dog’s temperature somewhat, so you want to avoid the risk of heatstroke as much as possible.

Set Up the Sandbox

Once you’ve chosen the perfect spot, it’s time to set up the frame or pit. You can build one yourself using sturdy lumber, but just make sure you put a liner of some kind in the bottom to help keep bugs from crawling up through the soil. Wood, landscape fabric, a tarp, or a plastic drop cloth work well – just poke or drill several small holes in it to help with drainage (unless using landscape fabric).

You can also use a plastic basin-style sandbox or even a kiddie pool. Again, just make sure it has a few holes for water to drain out of the basin – a water-logged or consistently damp sandbox can harbor harmful bacteria or become a breeding ground for mosquitoes.

Next, you’ll just fill up your box with sand. It’s always best to use sanitized play sand that’s safe for children – if it’s not safe for kids, it’s likely not safe for dogs.

With toys and treats in your dog’s sandbox, some bugs may want to move in on the territory. Spraying the perimeter with a natural bug repellent that’s safe for children and pets may not keep everything out, but it should help significantly. It’s also a good idea to keep the area around the sandbox clean and well-trimmed to discourage the presence of fleas and ticks, which like to hang out in weeds and tall grass.

It’s best to cover the sandbox at night or if it’s likely to go a while without being used. This will help keep bugs and debris out, as well as prevent neighborhood animals from using it as a litter box. It should be fairly tight-fitting and sturdy. If your sandbox came with a fitted cover, all the better.

Train Your Dog To Use It

Your dog may go straight to the completed sandbox and start digging away. If not, you can encourage your furry friend to use it by burying a few of his/her favorite toys or treats under the surface. They’ll likely sniff it out and get after it, but you may need to demonstrate it yourself a few times until they get the idea.

If possible, try not to leave any food items in the sandbox overnight, to avoid drawing the attention of bugs.

Observe Your Dog For Signs of Sand Ingestion

Perhaps the biggest risk sandboxes pose to dogs is what’s known as sand impaction. This is when a dog eats too much sand and it builds up enough to obstruct the dog’s digestive system. If your dog is chewing on bones or eating in the sandbox, they may be inadvertently ingesting small quantities of sand as they do so. A little bit likely won’t cause any problems but too much can be a very serious issue.

The symptoms of excessive sand ingestion or sand impaction include vomiting, constipation, lethargy, and loss of appetite, so observe your dog after they spend a lot of time in the sandbox. It also doesn’t hurt to keep an eye on your dog as they play and chew on treats to get a sense of how much sand they might be taking on – some will be picky about it, while some may even lick the sand itself.

It’s a good idea to sift the sand periodically to get rid of any unwanted debris like leaves and twigs (not to mention reclaim any stolen socks or other missing items). It also couldn’t hurt to replace the sand every year or so just to keep it fresh and relatively clean.