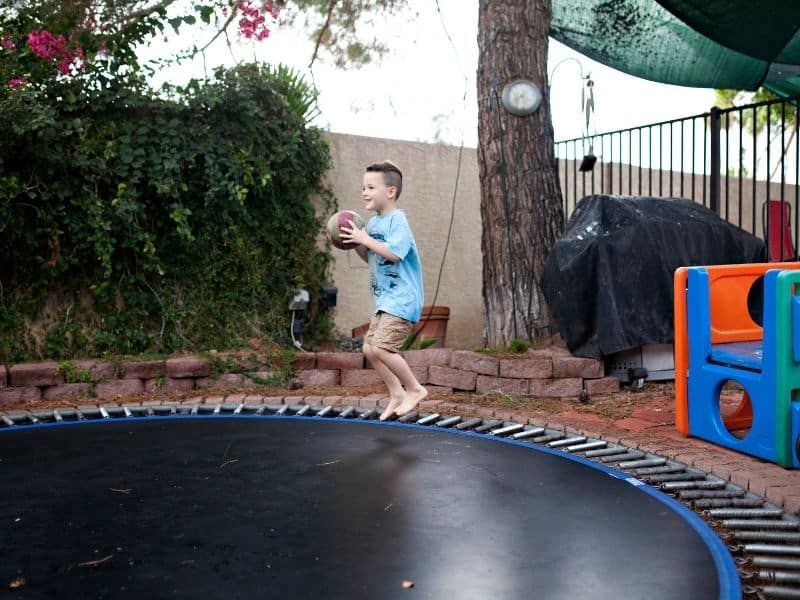 Trampolines have been a backyard favorite of many families for many years. It benefits the kids by encouraging them to go outside and get some exercise. But it also benefits the parents because it’s a great way for their kids to burn off all that seemingly endless energy they have. Plus, whether you’re a kid or an adult, trampolines are fun to jump on! But if you’re considering getting one of these bouncy investments, you have two choices: traditional (above-ground) or in-ground. In-ground trampolines are pretty popular these days, but many homeowners wonder if they’re really worth it.

From a purely financial standpoint, in-ground trampolines aren’t worth it. They are more expensive and require involved installation. However, there are some added benefits that make them attractive, such as safety and aesthetics. But before you decide, it’s important to have all the information.

Read on as we discuss everything you need to know about the benefits and drawbacks of in-ground trampolines.

“Better” is a relative term when it comes to comparing in-ground and traditional trampolines. Really, it depends on what you’re looking for from a trampoline. If you simply want a trampoline for your family that can be set up and enjoyed quickly, then in-ground trampolines are absolutely not better.

Traditional trampolines can go from delivery to enjoyment in less than a day. It usually only takes a few hours to set one of these up in a spot in the yard. Sure, it takes a little planning to make sure you’ve picked the best spot, but you can always move the trampoline if you need to.

In-ground trampolines, on the other hand, require much more effort and planning. Once you choose a place for the trampoline and dig the hole, you’re committed to that area. Plus, there are several things to be done before you ever dig the hole. We’ll talk more about those later.

Still, if “better” to you means having a nice looking yard without a trampoline sitting above the ground, an in-ground trampoline is the way to go. Plus, there’s also the question of safety to consider.

Are In-Ground Trampolines As Bouncy?

In order to get a high bounce on a trampoline, you need to have adequate airflow. This isn’t something to worry about with an above-ground trampoline, as there’s nothing blocking the airflow while people jump.

However, there are other factors to consider. Let’s take a look at them each, as safety is a big priority when considering a trampoline.

Some in-ground trampolines need to be installed slightly above ground level. This means that there’s a vertical gap between the trampoline frame and the ground of about 6- to 12-inches. The chances of someone falling off the trampoline and getting a leg or arm stuck in the gap is nearly nonexistent (because the gap is vertical, not horizontal). But it’s possible for an excited kid running to get on the trampoline to slip and get a limb caught in the gap.

To Enclose or Not to Enclose

Trampolines are inherently dangerous. Any time kids are jumping around or being active for any amount of time, the risk of minor injury is present. However, you can help ameliorate some of that risk by installing an enclosure net.

You’ll see many pictures online of in-ground trampolines without enclosure nets. And while it’s true that the importance of an enclosure net is decreased on these trampolines, it’s not completely eliminated. Kids can still launch themselves off the trampoline to land on the ground, which can cause injury.

So if you want to help ensure the safety of the jumpers, an in-ground trampoline with an enclosure net is the way to go.

When installed properly, in-ground trampolines are pretty safe. Improper installation often means that there are gaps between the trampoline and the ground, the walls of the trampoline pit are likely to collapse inward, or the trampoline itself can become unlevel.

This is why anyone attempting to go the DIY route for an in-ground trampoline needs to be sure they do everything correctly and don’t cut corners. This takes work, and it’s no small task. The other alternative is to hire someone to dig the hole and install the trampoline, which costs money.

Either way, proper installation is essential for safety’s sake.

If you want an in-ground trampoline without an enclosure net, it’s important that you consider a safe area to install the trampoline. Ideally, you’ll want an area surrounded by grass or some other soft material. You won’t want any hard objects like rocks, walls, concrete, or buildings nearby that people can accidentally launch themselves into. Of course, this is the same for a traditional trampoline without an enclosure net.

Benefits and Drawbacks of In-Ground Trampolines

Now that we’ve covered safety, let’s look at the benefits and drawbacks of in-ground trampolines as compared to their above-ground counterparts.

One of the biggest benefits of in-ground trampolines is their ability to blend into the landscape, to an extent. Since the bulk of the equipment is hidden from view, the yard is able to retain its pre-trampoline look, aside from the top of the trampoline, of course.

Some people won’t mind the look of a traditional trampoline in their yard, but others will. It’s up to you to decide which is better for your particular yard.

Next up is ease of use. In-ground trampolines are much easier to get on and off of. You don’t need any stairs or a ladder for little ones to use. They can simply step or crawl on! It can also prevent people from falling off while trying to get on or off the equipment, as often happens with traditional trampolines — especially if someone else is jumping at the same time!

Now for the drawbacks.

The installation process for an in-ground trampoline is much more involved than that of a traditional trampoline. Before ever digging the hole, you must make sure there are no buried lines or pipes in the area, which usually involves checking with the city. If there are, you’ll have to find another place to dig the hole.

But that’s not all. Some places have tough, rocky soil that’s hard to dig up. Simply using a shovel and a pickaxe may not work. You will likely need the assistance of a backhoe and someone to operate it. You’ll also need to determine what to do with all the dirt you dig up.

Depending on the type of soil you’re dealing with, you may need to install some kind of drainage system to deal with any water that collects in the bottom of the trampoline pit. There are a few options for this, and installing a sump pump is usually the easiest. One thing’s for sure: the last thing anyone wants is stagnant water under their trampoline, providing a breeding ground for insects and an attractive place for animals.

Cost is a big factor. Not only are in-ground trampolines more expensive than traditional ones, but you must also factor in the cost of digging the hole, installing drainage, and hauling away the dirt you dig up. This could all end up costing you three or four times as much as a traditional trampoline.

Plus, if you end up dropping a shoe or a phone under the trampoline, you may have to remove some springs in order to reach it, which can be a pain.

The final drawback is one of mobility. As mentioned earlier in this article, once you’ve committed to an in-ground trampoline, there’s no going back. If, for some reason, you need to move the trampoline, it’s a bit of an ordeal. But if you need to move a regular trampoline, all you really need are a couple of helpers and you can get it done quickly.

Why Are In-Ground Trampolines So Expensive?

In-ground trampolines are more expensive than their above-ground counterparts because they’re made to resist wear due to excess moisture. They also often have specialty pads that allow for airflow, which is important for bouncing.

The frame and springs of an in-ground trampoline are often double-coated galvanized steel. The double coating allows the frame to hold up to the moisture that tends to hang around inside the trampoline pit. These trampolines also include retaining walls, which help keep the dirt walls from falling into the pit.

Are In-Ground Trampolines Worth the Money?

It’s hard to give a definitive answer as to whether in-ground trampolines are worth the money. For some homeowners, the high price tag of the trampoline and installation is worth it for aesthetic and safety reasons. For others, the price tag is out of their price range.

It all depends on what you’re looking for from a trampoline. If you really like the sleek look of an in-ground trampoline, you may consider saving up for one. If you want a trampoline that’s less expensive and that requires less of an effort, then a traditional trampoline is the best option for you.

In-ground trampolines are more expensive, more involved, and only marginally safer than their traditional counterparts. But there’s still something very appealing about having one of these trampolines in your yard. They’re easy to cover when not in use and they don’t create a big eyesore. They can blend in with the landscape, which is what some homeowners want.

If you’re still interested in getting an in-ground trampoline for your yard, I recommend this one from In-Ground Trampoline Systems.

This American-made trampoline is built to last. The frame is made from 18-gauge steel wall panels and 14-gauge steel tubing. The jumping mat is engineered for maximum airflow, and the design means you don’t have to dig as deep as other in-ground trampolines require. The pre-galvanized springs allow for a smooth and high bounce, and they’re made to last long even when exposed to moisture.

Thanks for reading! I hope this article helps you determine what type of trampoline is best for you.